Philopotamus, they called her, the boys in the trees, following her slow progress down the main street of Lourdes Colony, Orlem. “Phi-lo-Phi-lo-po-tah-mus,” they would shriek, one ragged chorus picking up where the other left off. She, unsmiling, would walk the gauntlet, her shoulders swinging and double chins bobbing, eyes locked straight ahead. If she looked like she had a purpose, she reasoned, they would pipe down and go away. They never did.

When Philomena was little – a sweet child among the motley bunch of children perennially outside Obrigado Mansion, where she was born and raised – the elderly ladies of the neighbourhood would walk up to her and tug her cheeks. “So cute, men, she is,” they would say to each other, before stumbling into shared memories of former friends and relatives who were once as cute, in better times that were long behind them.

Philomena would endure their caresses and accept their adulation without question. She would then wriggle out of their grasp and waddle back to her games with the other children.

One of their favourite pastimes involved cutting a notch into a paper plane, hooking it to a rubber band, then lighting the tip on fire before sending it whizzing into the air. No one ever got hurt by this potentially catastrophic idea except for Zuleikha Furtado, who once had the misfortune of standing beneath a plane that was half on fire. She survived the incident, but her bald spot took years to disappear, and the children of Obrigado never let her forget it.

Then there was the game that involved creating a little noose from the vein of a coconut palm leaf. Carefully knotted, it would be lowered into one of the gutters on either side of the street. While some of the children held their nooses in a row, others, a few feet away, would swirl the muddy waters, prompting the frogs living there to move.

The trick was to get a noose in front of a swimming frog. The minute one moved its head into a dangling loop, the noose would be pulled, yanking the frog cleanly out of the water and leaving it to struggle at one end. It called for patience and an immense amount of concentration. It also explained why cricket bats and footballs were often found abandoned during the monsoons, with their owners all huddled in groups around a gutter.

Every day at 6 pm, on those wet, windy days and after, Mrs Brigette Sequeira would call for her daughter from the crumbling edifice that was Obrigado Mansion. “Philo, come for tea,” she would scream from the first floor. “Dadda will be home in twenty minutes.”

Philomena would drop her noose and run. Pushing open the red gate with paint peeling at its corners, she would walk past Mrs D’Costa, Mrs D’Souza or whoever happened to be around or staring at her from a doorway. “Evening, aunty. Evening, aunty,” she would mumble, rushing past before anyone could stop and ask about her parents, and whether they were still fighting.

She never quite knew how to tell them that they had never stopped. “So big she’s becoming, men,” Mrs D’Costa would say to Mrs D’Souza. “Nowadays these children have no time for us only.”

Still running, Philomena would hurry up the narrow concrete stairs of the building, her hands held out against its filthy walls for support, and head for Room 108. It was the last room on the first floor of the one-storey structure built in 1903 by the landlord, Francisco Fernandez, born in the village of Quepem in goa. He had spent most of his life here, surviving solely on rent collected from his tenants.

Holding her nose as she rushed past the two common toilets that stank perennially, Philomena would stop running a few feet from her door. She would wait a second or two, until she caught her breath, before walking in. It was always with a sinking feeling, especially on Sundays, when her dadda would be home.

Jude Sequeira was at the table when Philomena walked in that evening. Before him was a glass, a bottle of water and a quarter of Officer’s Choice, the brand of whisky he preferred, not because it tasted like real whisky but because it was cheap enough for him to afford three times a week.

Philomena ignored the table and walked straight to the kitchen, which took her less than ten steps to do.

Each living space in Obrigado Mansion had one large room and a cooking space, with a small cubicle at the corner that served as a bathroom.

The cubicles had no doors, so they could only be closed by the drawing of curtains hung from makeshift rods. There were no overhead or underground tanks for water, so tenants did what they could to store their share in plastic buckets or barrels, waking up daily at 5 am for the pitiful quota of a half hour allocated to them by the municipality.

The Sequeiras had split up their living room with the help of a wooden partition – after almost a decade of begging their landlord for permission – to create a separate sleeping area that they referred to as the bedroom. It comprised a large bed that Brigette had received as part of her dowry, which had supposedly belonged to her grandfather and had been made from a single block of teak. Philomena didn’t care about the wood but liked the bed immensely and thought about it for a second as she stepped into the kitchen, reaching for a clay pot in which boiled water was kept. The clay cooled the water, unlike refrigerators that chilled it.

Few of the tenants could afford refrigerators at the time. Brigette was at the stove, stirring something in a steel vessel while making balls of dough for chapattis. As Philomena poured water into the plastic cup placed upside down on the covered clay pot, her father called out.

“You will only say it when I tell you or wot?” Jude asked, his voice rising a notch.

“Wot you did all day today? Come and tell me.”

“I went to school and then to play.”

“Playing with all those bleddy roadside fellows all day. Wot you’re thinking, men? I’m working to send you to school, and you want to bleddy play with these loafers? You did your homework?”

“Why khaana, men? All the time khaana. Look at your size. You’re becoming like your mumma, bleddy fat –”

He was cut short by the appearance of Brigette at the kitchen door. “What you want, men?” she asked. “Our daughter wants to eat khaana, let her no! If you don’t want to spend on food for her, what you want to buy more liquor or what?”

“Shut up, men,” Jude shouted. “Wot is your bleddy business what I buy? You’re working or wot? You bleddy sit and gossip with the building ladies. My money, my liquor. Your father’s paying or wot?”

“Keep my father out of this, men,” Brigette shouted back. “When he was alive, he gave everything you asked no? Now that he’s dead, you want to bleddy take his name?”

“Wot big thing he gave, men? Wot he bleddy gave? One big cupboard and a bleddy gold chain? You want me to put a garland on his photo or wot?”

“Gold chain and cupboard only you remember, men? Wedding money who gave? That wedding car who paid for? Your mumma wanted new dress, who gave?”

“Wot you are dragging Mumma’s name for, men? I’ll bleddy give you a tight slap.”

“Give, men. You can only hit ladies. If my brother comes, you’ll bleddy sit in a corner like a coward.”

“I’ll fuck your brother, men. Wot I’m scared of? You think I’m scared of him or wot? Bring him and show, men. See what I’ll do then. Bring men, go and bring if you got guts.”

Philomena returned to the kitchen, the cup of water untouched before her. She stared at its walls, the sickly green peeling paint. It had been wallpapered once, before she was born, but the pattern was no longer recognisable. She thought she could see a hint of sunflowers, but it could easily have been yellow dots in an abstract pattern. It didn’t matter either way.

A crash of breaking glass interrupted her thoughts, followed by the sound of a slap. She rushed outside to see Brigette trying to push Jude, her left cheek reddening, tears streaming down her face. Jude, his eyes bloodshot, pushed her away. “Wot you’re looking at, men,” he told Philomena. “Bring another glass from inside and sweep this up. Do some work, men, around the house. This is a hotel or wot?”

She did as she was told. 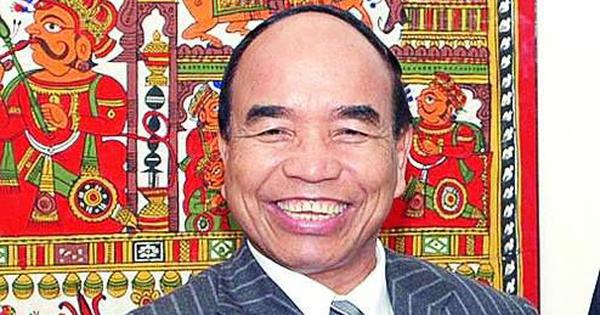