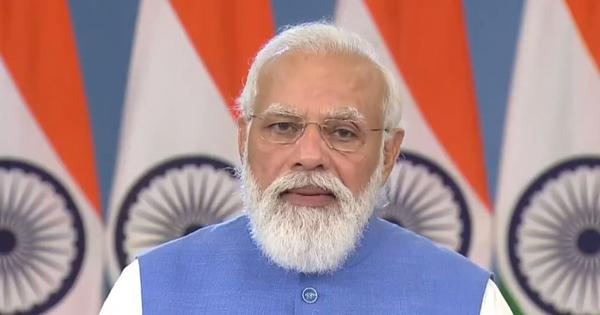 Prime Minister Narendra Modi on Wednesday said that international travel should be made easier through mutual recognition of vaccine certificates.

Modi’s statement came on a day the UK government revised its travel policy to include Serum Institute of India’s Covishield to its list of approved coronavirus vaccines. However, Indians travelling to the country will still have to quarantine for 10 days.

Media reports said the problem was not with Covishield but the vaccine certification in India.

On Tuesday, India’s Foreign Secretary Harsh Vardhan Shringla had described the decision of the United Kingdom’s government to not recognise Covishield as discriminating and warned of reciprocal action.

Modi said that India is now running the world’s largest vaccination campaign. “Recently, we vaccinated about 25 million people on a single day,” he said. “Our grassroots level healthcare system has delivered over 800 million vaccine doses so far. Over 200 million Indians are now fully vaccinated.”

The prime minister said that newer Indian vaccines are being developed and the country is also ramping up the production capacity of existing vaccines. “As our production increases, we will be able to resume vaccine supplies to others too,” he said. “For this, the supply chains of raw materials must be kept open.”

On Monday, Union Health Minister Mansukh Mandaviya said that India will resume exporting surplus coronavirus vaccines from October. India had halted export of Covid-19 vaccines in April after the second wave of the pandemic started to peak.

Row over the UK guidelines

The UK’s revised travel policy, announced on September 17, will be effective from October 4.

The guidelines state that people inoculated against the coronavirus in Africa and South America, and in some other countries, including India, the United Arab Emirates, Turkey, Jordan, Thailand and Russia will be considered unvaccinated.

British High Commissioner to India Alex Ellis on Wednesday clarified that Covishield “is not a problem”, ANI reported. “We’ve been having detailed technical discussions regarding certification, with the builders of CoWIN app and NHS app, about both apps,” he added. “They’re happening at a rapid pace, to ensure that both countries mutually recognise the vaccine certificates issued by each other.”

Ellis said that the UK “is open to travel” and a lot of people from India have been travelling to the country, including tourists, businesspersons and students.