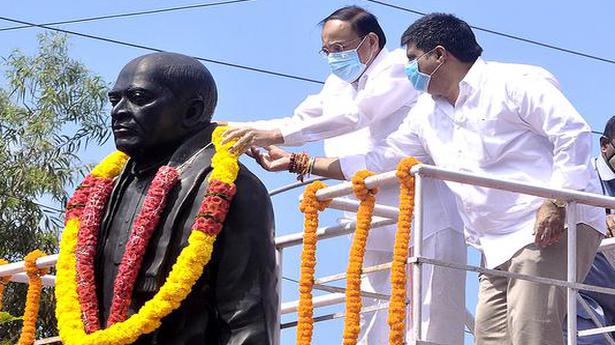 Vice-President M. Venkaiah Naidu on Monday paid rich tributes to former Prime Minister P.V. Narasimha Rao on the latter’s birth centenary and described him as a ‘legendary figure who had pioneered economic reforms’, in Visakhapatnam on Monday.

“Narasimha Rao was a multi-faceted personality—a phenomenal scholar, an astute administrator, a littérateur of renown and multi-linguist. He had steered the country away from an economic crisis through his consensual leadership and far-sighted vision,” said the Vice-President who garlanded a statue of Narasimha Rao at the Circuit House Junction in Visakhapatnam.

Crediting Narasimha Rao for ending the ‘Licence Raj’ in India, Mr. Naidu said Rao was the architect of India’s economic liberalisation. “It was him who had facilitated India’s entry into the World Trade Organisation (WTO),” Mr. Naidu pointed out.

“Narasimha Rao had always vouched for education in mothertongues in schools. I too have always maintained that the medium of instruction should be the child’s mothertongue up to high school level. The today’s generation should take inspiration from him ,” he added.

Expressing his disappointment that a great leader like Narasimha Rao did not get the recognition he ‘so richly deserved’, the Vice-President said, “Let us bring forth his contribution for nation building on his birth centenary celebrations”.

Mr. Naidu said no nation would be able to move forward by forgetting its culture, heritage and the immense contribution of the great leaders towards nation-building. The lives and teachings of great men should be passed on to the younger generation.