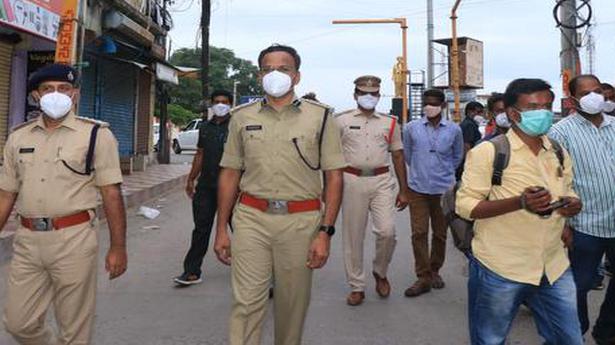 With the daily count of COVID-19 cases still causing concern, showing little respite in many mandals, the police have been instructed to implement the existing lockdown from 6 p.m. to 6 a.m. more stringently.

Chittoor is among the eight districts where the lockdown has been extended till July 7. On Monday, the number of daily cases stood at 409 and 6 casualties.

Speaking to the media here, Superintendent of Police S. Senthil Kumar said though the positive cases were gradually coming down in the last one week, it was perceived that an effective implementation of the lockdown would help further curtail the number of cases and put a check to the threat of the third wave.

Mr. Senthil said that as per the action plan, police personnel from the rank of constable to the Additional SP, and himself (SP) would be on duty to oversee the lockdown. In spite of the best efforts of the police, some people were not wearing facemasks and moving in public places.

“The police on duty would be monitoring the commercial establishments and other public places to enforce COVID protocols such as facemasks and physical distancing during the relaxation time, and would impose fines on the defaulters. Similarly, those who move out during the lockdown period without valid reasons would be fined and also booked under relevant sections of the IPC,” Mr. Senthil said.

The SP said that since the COVID second wave strictures came into force, 3,000 e-challans were issued to the defaulters for violating the protocols. He instructed the police personnel at the border check posts to monitor the movement of public and prompt them to adhere to the protocols.

“In view of the threats of Delta-Plus virus and the possible third wave, the public should cooperate with the police and government functionaries on COVID duties and follow the restrictions of the lockdown,” Mr. Senthil added.