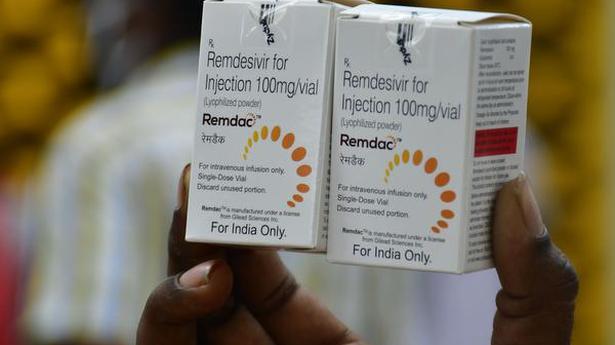 TDP national general secretary Nara Lokesh had alleged that a massive scam had taken place around the remdesivir injection.

The government of Andhra Pradesh has rebutted messages being circulated in the print and electronic media groups that remedesivir injections that expired in March 2021 were administered to patients in Area Hospital, Narsipatnam.

After the videos went viral on social media, Assistant Director, Drug Control, Visakhapatnam , Rajitha clarified that Remedesivir injection is a new drug and the Drugs Control General of India (DCGI) had initially given instructions to the manufacturer to fix shelf life and expiry date as six months based on the stability studies submitted earlier by the manufacturer.

Hence, the version that injections that had expired were administered is not true, Ms. Rajitha said.

Earlier, TDP national general secretary Nara Lokesh had alleged that a massive scam had taken place around the remdesivir injection. Mr. Lokesh said that Mylan and Hetero Pharma companies are producing this medicine in Andhra Pradesh. Remdesivir injections were given to COVID-19 patients at the Government Hospital at Narsipatnam in the Visakhapatnam district, but the labels of these injections were changed. As per Section 104 of the Indian Drugs and Cosmetics Act, the containers of any drug should carry labels of the respective manufacturing company only and no other label should appear on these containers.

In Narsipatnam, the remdesivir injection bottle is carrying the label of a different company and not of Mylan which is the original producer. Once the label is opened, it reveals how the labels are tampered in order to change the expiry date on the drug.

He also demanded a thorough probe to bring out the details of whether the expired remdesivir was given to all of the patients or only some of them at this hospital.

Three of the patients who were given remdesivir injection here, passed away. The deceased are Chitikela Tatamma Nayudu, A. Sanyasi Rao and S. Arun Chand. Of this, Nayudu was a reporter with the Eenadu media house. There is recorded proof in the hospital register that these three persons were given remdesivir injections at the Narsipatnam Government Hospital, Mr. Lokesh alleged.