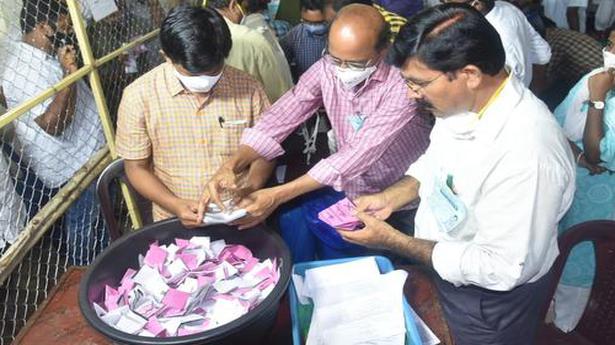 The ruling YSR Congress Party (YSRCP) won all 34 ZPTC seats in Vizianagaram district. The party had already won three seats unanimously and remaining 31 also went into its kitty, with the little opposition from other parties.

The same trend continued in MPTC elections too. YSRCP candidates won 389 seats out of total 487 seats for which elections were held a few months ago.

The Telugu Desam Party (TDP) could win 86 seats while BJP could bag only one seat. As many as 11 independent candidates emerged victorious, despite a tough competition from their YSRCP and TDP counterparts.

The TDP gave a tough fight to the YSRCP candidates in Ramabhadrapuram, Bobbili, Terlam and a few other places. Former MLA of Vizianagaram Meesala Geeta said that it was a moral victory for the TDP as the party could win respectable number of MPTC seats, despite of pressures and local dominance by the YSRCP leaders.

She asked the party leaders to strengthen the party at grassroots level. Vizianagaram Collector A. Suryakumari thanked all political parties and officials for completing the counting process in a hassle-free manner.

Speaking to media, she said that as many as 25 votes were damaged in Badangi, but the TDP candidate was declared winner after getting a majority by 300 votes. “We have ordered recounting in five places where objections were raised by agents,” she added.