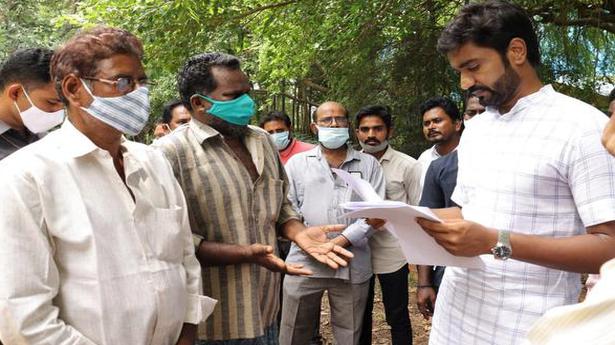 The farmers displaced by the Thota Venkatachalam Pushkara Lift Irrigation Scheme at Purushothapatnam in Sitanagaram mandal of East Godavari district met Rajamahendravaram MP Margani Bharat here on Sunday and urged him to ensure early release of compensation for the land acquired by the State government for the ₹608 crore lift irrigation scheme.

The project aims at providing irrigation facility for 1.86 lakh acres and drinking water for 5.3 lakh people of 19 mandals in nine Assembly segments by drawing water from the Godavari at Purushothapatnam. The Assembly constituencies to benefit from the project are Rajanagaram, Rajamahendravaram, Anaparthi, Jaggampeta, Prathipadu, Pithapuram, Peddapuram and Tuni in East Godavari district and Payakaraopeta in Visakhapatnam district.

At least 90 farmers led by K. Srinivasa Raju and K. Dharma Raju shared their grievances pertaining to the delay in the release of compensation for their land and appealed to the MP to hold talks with the State authorities for its early release.

Mr. Bharat told them that he would take up the issue with the officials concerned from the Irrigation and Revenue departments and also bring it to the notice of the higher authorities.

The farmers submitted a memorandum to Mr. Bharat with the details of the farmers who had parted with their land for the lift irrigation scheme.