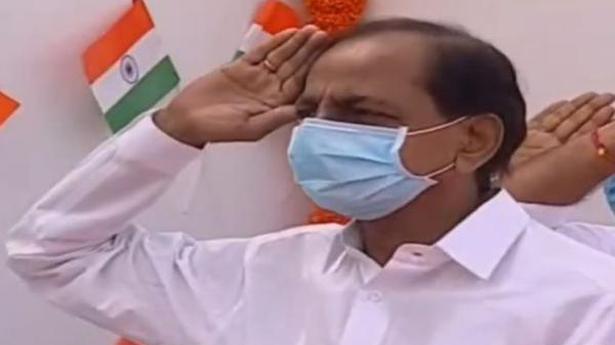 For the second consecutive year, the Telangana State Formation Day celebrations remained a muted affair, in view of coronavirus.

Earlier, he paid floral tributes to martyrs of the separate statehood movement, at the Gun Park.

The celebrations were kept a low key affair this year on account of COVID-19 pandemic.

The State government has imposed several restrictions and issued instructions on the celebrations citing the pandemic.

Vice President M. Venkaiah Naidu and Prime Minister Narendra Modi wished the people of the State on the occasion.

Governor Tamilisai Soundararajan took to Twitter to extend her greetings.

“Heartiest wishes to all on the occasion of the Telangana State Formation Day. Tributes to all those martyrs, who laid down their lives for the cause of Telangana. Wishing the Telangana State a great success on the path of progress and prosperity. #JaiTelangana,” Ms. Soundararajan tweeted.

Greeting people on the eve of Telangana Formation day, Mr. Rao said the State has excelled in all the sectors within a short span of seven years and laid strong foundations and offered stability.

“The Telangana State is fulfilling the demands of the Separate Telangana statehood movement one by one. Water for irrigation and drinking, Power, medical and Health, Roads and all other infrastructure facilities are being provided, reaching short term and long term aims.” he said.

For the second consecutive year, the Telangana State Formation Day celebrations remained a muted affair, in view of coronavirus.

The nominated dignitaries including Ministers, Government Whips and others unfurled the national flag at their respective designated district headquarters.