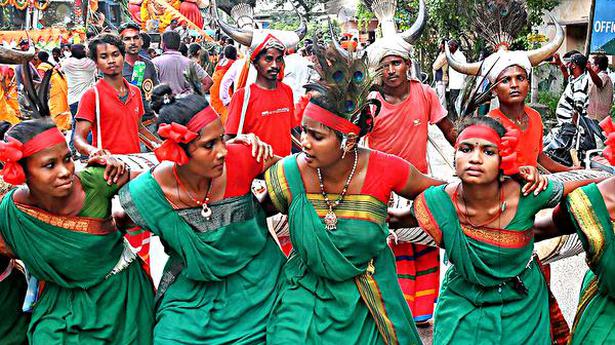 Religious fervour permeated the Kalvavoddu area here on Sunday as hundreds of idols of the elephant-headed God Ganesha were immersed in the Munneru river marking the grand finale of the 10-day Ganesh Chaturthi festivities.

The main streets leading to the Ganesh immersion site were abuzz with hectic activity as a steady stream of vehicles carrying the idols of Lord Ganesha in different hues and sizes reached the site earmarked for Ganesh idols nimajjanam amid elaborate bandobust arrangements made by the police.

Spiritual ecstasy reached its crescendo as staunch devotees of Lord Ganesha chanted slogans in praise of Gajanana, the elephant-headed God, worshipped as the remover of obstacles, en route the religious procession.

Earlier in the day, Transport Minister Puvvada Ajay Kumar flagged off the Ganesha Shoba Yatra at Gandhi Chowk in the town.

The shoba yatra passed through the main streets of the town before culminating at Kalvavoddu peacefully amid tight security arrangements and constant surveillance through a wide network of around 180 CCTV cameras by the police from the command-and-control centre. In Bhadradri-Kothagudem district, the banks of the Godavari at the temple town of Bhadrachalam teemed with hordes of devotees carrying the idols of Lord Ganesha for nimajjanam.

According to sources, Superintendent of Police Sunil Dutt participated in the Ganesh idols immersion ritual and oversaw the smooth conduct of the event in the famous temple town.