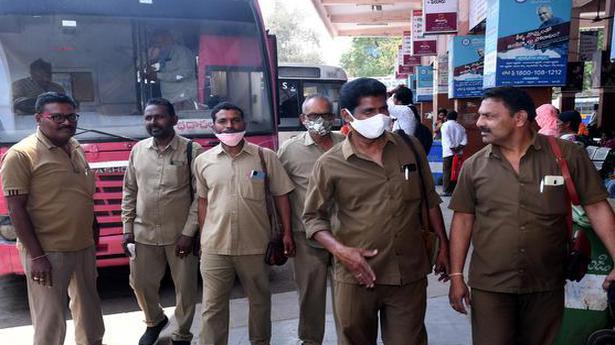 In a memorandum addressed to Chief Minister K Chandrasekhar Rao, union general secretary K. Raji Reddy said the pay revision for the TSRTC employees was due since April 1, 2017.

Though the State government implemented the 16% interim relief for the TSRTC employees, the long-awaited pay revision with fitment is yet to be implemented for them, he pointed out.

Referring to the Chief Minister’s announcement of 30% fitment under the PRC for the State government employees of all categories, including teachers and pensioners, on the floor of the Assembly on Monday, he said there is no mention of the TSRTC employees in it.

He urged the Chief Minister to ensure implementation of the pay revision with 30% fitment along with payment of the PRC-related arrears for the TSRTC employees.

Meanwhile, in a statement, AITUC State secretary S. Narasimha Rao alleged that the municipal and gram panchayat contingent workers, mid-day meal workers and sweepers of the State-run schools were ignored in the PRC.

He alleged that the “unscientific” pay revision resulted in a nominal pay hike for the lower-rung employees and injustice to thousands of municipal and gram panchayat workers.

He demanded that the government implement a minimum wage of ₹ 21,000 with 30% fitment to the contingent workers engaged in vital tasks such as maintenance of sanitation in municipalities and gram panchayats.