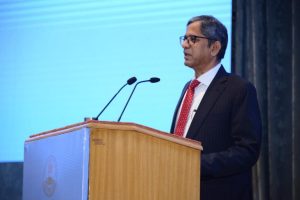 Chief Justice of India (CJI) N.V. Ramana said on Tuesday that India encourages all modes of resolving alternative disputes, including arbitration and mediation.

The country adopted the UNCITRAL Model Law and enacted the Arbitration and Conciliation Act, 1996, in order to make “the arbitral process more efficient and to harmonise it with the international practice and procedure,” noted the CJI, while delivering the inaugural address at the Annual Meet of Indo-German Chamber of Commerce on theme ‘Arbitration in a Globalised World- The Indian Experience’ at Dortmund in Germany.

He said in the recent years, there has been some apprehension in the minds of parties about increasing interference of domestic courts in the arbitration process.

The CJI further said that Indian Courts have been known for their pro-arbitration stance.

“Courts in India assist and support arbitration and leave the substantive part of adjudication to the arbitral tribunal itself,” he added.

As per the CJI, the Indian judiciary is recognised for its independence and for giving paramount importance to the rule of law.

He said the Indian judiciary “eternally guards the constitutional rights” in the largest democracy of the world.

“You can trust the Indian judiciary for its absolute independence and inherent constitutional strength to treat all parties equally and equitably. The Constitutional Courts of India – the High Courts and the Supreme Court – have the power to judicially review every act of the Government. They can strike down any law that is not in tune with the Constitutional principles. They can also set aside the arbitrary measures of the executive,” he added.

He stressed on the importance of strong legal framework in protecting the investments and resolving the disputes, as in any business or trade, difference of opinions and conflicts were bound to arise.

He said, “There is a need to establish an efficacious mechanism to address these issues and ensure that business operation continues without much hassles.”

CJI Ramana said the adoption of Model Law on International Commercial Arbitration by the United Nations Commission on International Trade Law (UNCITL) in 1985 has contributed greatly in developing a uniform global arbitration landscape, where fairness and efficiency were given paramount importance.

Talking about international arbitration, he said it was a means to resolve the disputes between the parties involving a foreign element, which was regulated by the terms agreed upon by the parties themselves.

As per Ramana, the degree of autonomy available to the parties, uniformity of law, flexibility of procedure, lower cost, increased enforceability, confidentiality and benefit of having domain experts were the advantages of international arbitration.

The CJI further stressed on the need to balance the “geography of international arbitration” as due to severe lack of resources and infrastructure in the developing countries, the parties chose to resolve their disputes in these established resolution centres like Singapore, London, Paris or Stockholm, at severe cost to them.

He stressed on the need to establish modern institutional arbitration centres with pre-established rules and framework to give parties the much-needed certainty and transparency, he underlined.

Talking about the constitutional rights, rule of law and human rights, the CJI said that any harm to the environment in one part of the world could affect the people everywhere.

“Violation of rights or injustice in one part of the world affects the entire system of human rights,” he noted.

The CJI said the Indian Judiciary has been eternally guarding the constitutional rights and the Indian Courts never discriminated on the basis of the country of origin, as everyone was equal before them.

The CJI said the Commercial Courts Act was enacted in India for fast-track disposal of cases by establishing special benches for commercial matters.

As per the CJI, the special Act has led to further streamlining and speedy dispensation of justice in commercial matters.

Over the Indo-German commercial relations, the CJI highlighted the bilateral agreements between the two countries by setting up fast-track mechanism to integrate various medium-sized German companies into the Indian market and vice-versa.

He said the extensive training and skill development programmes of the Indo-German Chamber of Commerce (IGCC) were helping the Indian workforce integrate with the German business world.

“The IGCC is moving in the right direction by having set up an Arbitration Centre with its own set of rules, and a Claim Case Procedure for mediation. These need to be further strengthened and popularised. Additionally, I would welcome setting up of more and more International Arbitration Centres,” he added.

CJI Ramana also had a piece of advise for the institutional arbitration centres functioning across the world.

He said the arbitration centres may consider joining hands to form a council or confederation in order to help in sharing their experiences and adopt best practices.

This will create a level-playing field in the arbitration arena across the world, added the CJI.