You Are Here Home Judiciary New Wine in New Bottles 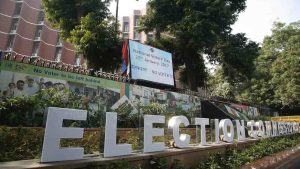 Chief Election Commissioner (CEC) Rajiv Kumar had written to the law ministry requesting it to issue a notification for linking voter ID with Aadhaar. In fact, the CEC had also sent proposals to the central government to set four dates for people to register as voters, ban exit and opinion polls and make rules for the candidate to contest from just one seat.

The Election Commission has sent six important proposals to the law ministry. It requested the government to notify the rule of four cut-off dates for linking Aadhaar with voter ID cards and for eligible people to be registered as voters. In December 2021, the Rajya Sabha passed the Election Laws (Amendment) Bill, 2021, by voice vote, after which the way was cleared for linking voter ID cards with Aadhaar. The Opposition had staged a walkout from the House in protest against the Bill and alleged that the central government had passed it in a hurry without enough discussion.

The Election Commission has also sought the right to deregister political parties and sought amendments in Form 24A to make it mandatory to make public information about all electoral donations above Rs 2,000, instead of Rs 20,000. This comes in the backdrop of the Commission’s action against “registered unrecognised political parties” (RUPPs) last month. The Election Commission had announced a cleanliness drive, launching “graded action” against more than 2,100 RUPPs for flouting rules.

In addition, parties which have failed to submit the contribution report before the Election Commission or have not informed it about any change in their name, office, office bearers and official address are being de-registered. Section 29A of The Representation of The People Act, 1951, empowers the Election Commission to register associations and bodies as political parties. However, there is no constitutional or statutory provision that gives it the power to cancel the registration of parties.

In addition, the Election Commission had mentioned in its booklet of electoral reforms proposed in 2016: “Many political parties get registered, but never contest elections. Such parties are only on paper. The possibility of forming a political party to keep an eye on availing the benefits of income tax exemption cannot be ruled out either. It would be logical that he who has the power to register political parties should also have the right to cancel the registration of political parties in appropriate cases.”

The Election Commission has also recommended a ban on exit and opinion polls from the time the notification of the election is issued till its completion. The Commission has also asked the centre to allow a person to contest from only one seat at a time. If that is not possible, a fine should be imposed to deter the practice.

There have been several prominent instances of political leaders contesting elections from multiple constituencies. In the 2014 Lok Sabha election, Prime Minister Narendra Modi contested from Vadodara in Gujarat and Varanasi in Uttar Pradesh. He won from both places, after which he relinquished the Vadodara seat. In the 2019, Lok Sabha election, Congress leader Rahul Gandhi contested from Amethi in Uttar Pradesh and Wayanad in Kerala. He lost from Amethi, and became the Member of Parliament from Wayanad.

Following these events, the government on June 17 issued four notifications allowing linking of electoral roll data with Aadhaar, making electoral law gender neutral for service voters and enabling young citizens register as voters four times a year instead of the present one. The notifications are part of the Election Laws (Amendment) Act, 2021, passed by Parliament late last year.

Law Minister Kiren Rijiju wrote on Twitter that four notifications in this regard have been issued in consultation with the Election Commission. The Union minister shared a chart to highlight that the notifications will enable linking of electoral roll data with the Aadhaar ecosystem to curb the menace of multiple enrolment of the same person in different places. He also said that now a citizen who turns 18 on the January 1 or April 1 or July 1 or October 1 in a calendar year can immediately apply for voter registration. “The four qualifying dates will considerably enhance the voter base,” he said. As of now, January 1 is the only cut off date to register as a voter. Those turning 18 on or before January 1 can register as voters on day one of January. Those turning 18 after that have to wait for one whole year.

On making electoral law gender neutral, he said the word “wife” will be substituted with the word “spouse”, making the statutes gender neutral. This will allow the wife or husband of a service voter to avail the voting facility available. Soldiers deployed in far flung areas or members of Indian missions abroad are some of those considered as service voters.