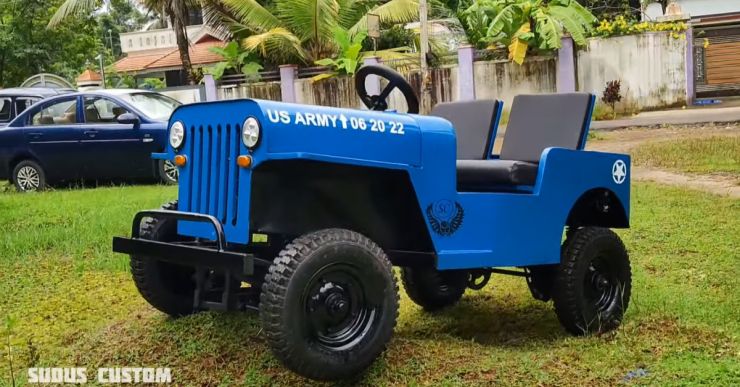 Remember Rakesh Babu from Kerala who became popular after a video of his mini Volkswagen Beetle went viral on the internet. After the Volkswagen  Beetle, Rakesh has built several miniature models of cars and motorcycles. Some of them have been featured on our website as well. He also build a Yamaha RX100 motorcycle which used the motor from a chainsaw. He has also build electric miniature versions of Shelby Cobra and Jeep in the past. Now he has made a new mini Jeep that works on battery.

The video has been uploaded by sudus custom on their YouTube channel. In this video, Rakesh talks about how he made the Jeep and talks about the components used in it. The chassis or the frame of the Jeep was made by Rakesh at his workshop only. This is not the first time, he has made an electric Jeep. As he has done this once, he had an idea on what all things he would need for this build.

The metal pipes were fabricated in the workshop to make the frame and he used metal sheets to make the body panels. The Jeep gets a working suspension set up. I uses shock absorbers from a Bajaj Pulsar 180 motorcycle. The rims on this Jeep are from a auto-rickshaw. The headlamps are actually aftermarket fog lamps that are used on cars. The turn indicators on this Jeep are borrowed from a Maruti car. The front grille was completely made by Rakesh Babu at his garage.

The bonnet gets sticker work the fenders are all made from metal. The front bumper on this mini Jeep are also made from metal pipes. Moving to the rear, the boxy design on the regular Jeep has been retained. The tail lamps are from autorickshaws too. There is Willys sticker along with the sticker of his garage. The whole Jeep was painted in Blue and looks very neat. The seats are custom made. The upholstery work on the seats was done by someone else. The steering wheel on the Jeep was also made at the workshop and the steering column was also taken from a Maruti.

He mentions that he has made this Maruti for children as a toy. The Jeep uses an electric motor. Rakesh had to source the batteries from an electric scooter showroom. The batteries are placed under the seat so that there is not much pressure on the rear suspension. A converter is placed under the bonnet. The electric motor on this Jeep sends power to the rear wheels using a chain drive system from Hero CD100 motorcycle. It even has a reverse gear. The reverse mode can be engaged either by turning the switch on or pushing he gear lever to the front and then accelerating the car.

Vlogger even shows how the car drives. The suspension on this Jeep can be seen working without any issues. The batteries take around 7 hours to completely charge and the charging port is placed on the dashboard of the Jeep. Rakesh however does not mention anything about the range that this car mini electric Jeep for children offers.

Also read: Oppo to launch electric vehicle in India by 2024