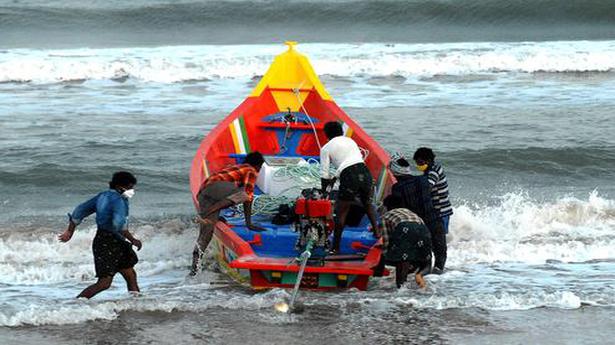 Rolling up his sleeves, fifty-year-old Narayana, along with other scores of fishermen, gather enthusiastically on the Kothapatnam sea shore in the district. Many of them are setting sail for the first time on Wednesday after the two-month fishing holiday ended on June 14.

The holiday was imposed by the State government on April 15 on the east coast to conserve fish and other marine resources during the breeding season.

Fishermen, who spent the two months in mending nets and overhauling mechanised boats, resumed the activity from 69 landing centres across the coastal mandals in Prakasam. As many as 2,300 motorised crafts and 42 mechanised boats were back in action.

“We are hopeful of better catch season this year as officials have predicted a normal southwest monsoon,” said a community elder Prabhu Prakash Naidu from Kothapatnam Pallepalem.

As they prepare to go about their usual business, they iterate their demand for enhancement of fuel subsidy.

“We take the trouble travelling long distances for a good catch. The unprecedented hike in the price of diesel has made fishing unviable,” a group of fishermen at Pakala complained.

About 10,000 fishermen families in Prakasam district have been provided with an financial assistance of ₹10,000 to compensate for the loss of income during the fishing holiday, said Fisheries Joint Director A. Chandrasekar Reddy.

However, about 3,000 fishermen did not get the benefit for various reasons like mismatch of names in the Aadhaar card, ration card and savings bank account in the coastal mandals of Ongole, Kothapatnam, Chirala, Vetapalem, Chinnaganjam, Nagulapapadu, Tangutur, Singarayakonda, Ulavapadu and Gudluru. Efforts were being made to correct the discrepancies, he added.