You Are Here Home INDIA Has Jagan Reddy government crossed a new line by charging TV news channels with sedition? 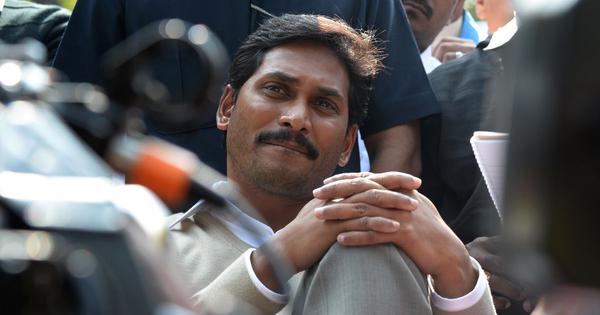 For decades, the media in Andhra Pradesh has been divided on party lines. Politicians seem to frequently attack newspapers and television channels seen as supportive of the party opposing them. Yet, even in this highly politicised media landscape, it seems Chief Minister Jagan Mohan Reddy’s government has crossed a line.

On May 14, the Andhra Pradesh police registered a case of sedition against YSR Congress Member of Parliament Raghurama Krishna Raju – who has, since his election, differed with the ruling party’s leadership – for attempts to create “hatred, contempt, disaffection towards the government.” The first information report said that Raju has “particularly targeted” the Reddy and Christian communities by creating a false narrative that the state government favoured them. Raju had made comments targeting the Andhra Pradesh government’s Covid-19 response.

The rebel MP was arrested the next day. On May 16, the Andhra Pradesh High Court ordered his transfer from the Guntur district jail to a private hospital after a report from a lower court that said Raju had several injuries. The MP’s lawyers and family alleged he was tortured by the police, though the state maintained they self-inflicted injuries.

While this drama was playing out, what went out of focus was the fact that the FIR against Raju had named two television channels. TV 5 and ABN Andhra Jyothy were also accused of sedition for carrying Raju’s comments by giving him “premeditated and organised” slots, allegedly showing a meeting of minds to commit the crime.

The two channels immediately moved the Supreme Court. While under usual circumstances the channels would have been asked to approach the High Court for remedy, the Supreme Court took it up following its own observations in an earlier case that the media should not be targeted for being critical of governments in their response to the pandemic.

The comments from the Supreme Court, as it ordered the Andhra Pradesh police not to take coercive actions against the TV channels, showed how drastic the move to book the channels was. The three-judge bench headed by Justice DY Chandrachud not only observed that the FIR did not establish the crime, it also said that the time has come to define the limits of sedition, especially in relation to freedom of press.

In other words, the state government’s attempts to muzzle the local press has become an event of national importance that may lead to a landmark judgement on sedition and its use.

However, political commentators in Andhra Pradesh feel the rap from the Supreme Court may not change the relationship between the media and the political parties in the state, given how politics works there.

It did not take too much time for Jagan Reddy, who was elected as chief minister in May 2019, to indicate what was in store for media that were seen as opposed to the YSR Congress.

In his very first public speech after taking over as chief minister, Reddy singled out three media houses and delivered a warning. He said his government will not hesitate to file defamation cases against Eenadu, Andhra Jyothy and TV 5, all three regarded as close to the rival Telugu Desam Party.

This attitude towards the three media houses began to make itself evident almost immediately. In the budget session of the Assembly that year, ETV, owned by the Eenadu group, ABN Andhra Jyothy and TV 5 were barred from covering the session after they allegedly violated Assembly norms.

This animosity is not recent. Jagan Reddy’s father YS Rajashekhara Reddy, a giant of the Congress in formerly undivided Andhra Pradesh, used to consistently hit out at Eenadu and Andhra Jyothy. Congress followers often referred to these newspapers as “yellow papers”, a derogatory term usually used for gossip material.

In fact, in 2008, Rajashekhara Reddy’s family launched the Sakshi group, which now publishes the Sakshi Telugu newspaper and owns Sakshi TV. The media group was started as a counter to pro-TDP media houses and played a vital role in Jagan Reddy’s Assembly election campaign in 2019.

However, former journalist and political commentator Telakapalli Ravi said that division among media houses as pro-TDP or pro-Congress and later pro-YSR Congress has a long history going back to the 1950s. And all three parties have attacked media houses when they held power.

“In the 1950s, the Congress used to consistently attack Telugu media as being pro-Communists,” he said. The divisions were entrenched with the advent of NT Rama Rao’s Telugu Desam Party. Eenadu, for example, has always been seen as favouring the Telugu Desam Party. “In fact, Rajashekhara Reddy used to cite an affidavit that Eenadu had once filed in which it apparently claimed openly that it was anti-Congress,” Ravi said.

The former journalist added the acrimony has deepened with the explosion of electronic media in the Telugu states. “This is not only about Andhra Pradesh. You also see such divisions sustained in Telangana after the bifurcation,” he pointed out.

These divisions mean media houses come under varied forms of pressure from the party in government. While the most commonly used threat is that of defamation, there are also indirect measures like cutting down government ads and blocking the transmission of channels in the local cable networks.

TV 5 and ABN Andhra Jyothy have accused the Jagan Reddy government of blocking their transmission through multi-system operators, who provide cable TV connections, since September last year. Executives of the channels have told media houses this “unofficial ban” continues even after orders from regulators to lift it.

This apart, in 2019, the Jagan Reddy government passed a controversial order that delegated powers to secretaries of various departments, giving them powers to file defamation cases against the media, a move that saw widespread criticism.

What is to be noted, however, is that such actions against media houses are not peculiar to the Telugu states in South India. In neighbouring Tamil Nadu, former Chief Minister J Jayalalithaa was known to file hundreds of criminal defamation complaints against newspapers and television channels for critical comments against her. Almost all of these cases were invariably thrown out by the Madras High Court.

Observers feel that the Jagan Reddy government may have crossed a new line this time by invoking the sedition, something that even the Supreme Court has now slammed.

“I cannot think of another instance where sedition was invoked against TV channels and that too for merely carrying the comments of an MP,” Ravi said. He said he does not see the relationship between the media and the political parties improving any time soon given the deep bitterness that exists.

AS Panneerselvan, Readers’ Editor of The Hindu, said the culture of slapping sedition cases against journalists and media houses started in North India. The sedition clause has been used so frequently in Bharatiya Janata Party-ruled states in the recent years that it has almost normalised its invocation. “In my opinion, such drastic measures are adopted in the South after they succeed in the North,” he added.

In this context, he said the Supreme Court judgement on Thursday quashing a sedition case filed against senior journalist Vinod Dua in Himachal Pradesh was extremely important. “We can see this as the first pushback from the higher judiciary against such abuse of law,” he said.

Panneerselvan added that after the 1990s, a significant change in the way governments have functioned was the manner in which enabling elements of fundamental rights were undermined and focus shifted to the reasonable restrictions.