You Are Here Home ANDHRA Flower trade wilts under lockdown

In pre-COVID times, about two dozen hamlets in Nagalapuram, Pitchatur, Narayanavanam and Puttur mandals in the district used to abuzz with activity in the summer months.

It was during summer that flowers, mainly jasmine and tuberose, used to sell like hot cakes. Many gunny sacks of jasmine used to be loaded on to APSRTC buses and trucks bound for the Koyambedu flower market in Chennai.

After COVID struck the country last year in March, around 200 families in these hamlets who predominantly depend on cultivation of different flowers were left in dire straits. A large number of them are small farmers growing the flower varieties in just a quarter of an acre.

Though their business resumed in September, their fortunes were yet to return. Just as things were getting back to normal, the second wave hit the country in March dashing their hopes. Presently, not even a single sack is reaching Chennai, which is under rigorous lockdown strictures. It has been two months since the flowers in their small-sized gardens has seen any takers. Only a few households that are not used to missing the daily pujas buy these flowers.

It is only a namesake business at the trading points (mandis) elsewhere in the district. “Before the pandemic, we used to get good money for our stocks immediately. Now we are just dumping our flower sacks there. Once in a week or fortnight, we get our payment, ten times less than our customary price. We can’t protest too. We have no choice but to abandon the crop,” says Mutthurasa (30), a farmer of Nagalapuram mandal.

Pitchatur mandal is known for producing the finest jasmines, thanks to the presence of the Araniyar reservoir, which serves the interests of hundreds of farmers. The adequate level of groundwater table is another reason for bumper crops of flowers here. However, the pandemic has robbed the happiness of the growers in the mandal, which has taken the brunt.

At Narayanavanam mandal headquarters, over a hundred flower vendors have been left without comfort since March last year. Their customers were a good number of pilgrims visiting the Kalyana Venkateswara Temple here.

“Most of our customers are now not willing to buy flowers. The fear of infection inhibits them from approaching us. It seems they have made up their minds to do without flowers for a few more months,” said a flower seller Velamma (55). 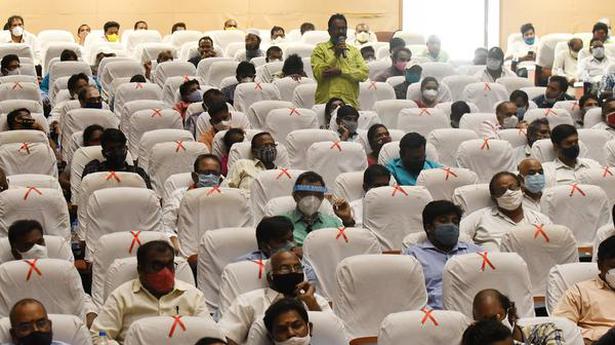