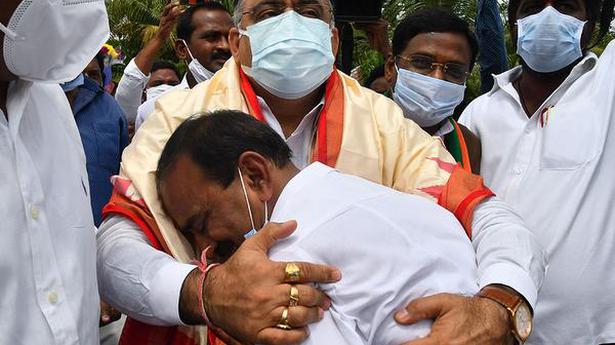 Senior BJP leaders led by State in-charge and general secretary Tarun Chugh held a luncheon meeting with expelled TRS minister Eatala Rajender at his house on Friday to discuss his joining the party in New Delhi on Monday.

Later, Mr. Chugh spoke to media persons when he said the ouster of Mr. Rajender from the Cabinet reflected the arrogance of Chief Minister K. Chandrasekhar Rao and struggle for self-respect by Mr. Rajender. The voice of Mr. Rajender against the arrogance, corruption and family rule of Mr. Rao was scuttled both within the party and outside.

It appeared that separate Telangana was a reality only for the benefit of KCR’s family. The objective of statehood was lost.

Mr. Rajender was forced out of TRS because he spoke the language of BJP against Mr. Rao within the party. The BJP was committed to ending the dictatorial rule and arrogance of KCR. For this, the party would take along all the workers and leaders who wished to go along. Arrogance would be defeated and family rule would end in the State, Mr. Chugh added.

TS to take up new irrigation projects on Krishna

Youth from Kodad dies in the US