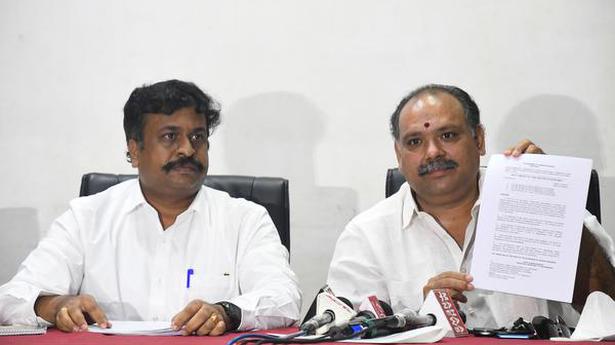 The Andhra Pradesh Government Doctors Association has strongly opposed a Government Order (G.O.) issued recently by the Medical and Health Department that seeks to delegate all powers, including service matters pertaining to medical and health employees, to Joint Collectors.

Addressing a press conference on Monday, the association’s State convener Jayadheer Babu said that the employees were agitated by the G.O. 64 issued by the government.

Dr. Babu said that a Joint Action Committee (JAC) of employee associations has been formed to launch a stir against the G.O. The JAC would meet Chief Minister Y.S. Jagan Mohan Reddy and Chief Secretary Adityanath Das to urge the government to do the needful. “If the G.O. is not withdrawn immediately, the doctors will boycott Doctors Day on July 1 and will not accept any awards, rewards or incentives given on the occasion,” he said.

As per the order, the Joint Collector (Village and Ward Secretary & Development) shall act and discharge functions such as Chairperson of District Selection Committee for district-level recruitments of Health Department under DMHO/DCHS/Principals of Government Medical Colleges and superintendents of teaching hospitals. The JC will be the reporting authority for all Annual Confidential Reports of Sub District Level Officers of Health (up to 2nd level Gazetted Officers under Health Departments). Disciplinary Authority for all district-cadre posts working in the Health Department.