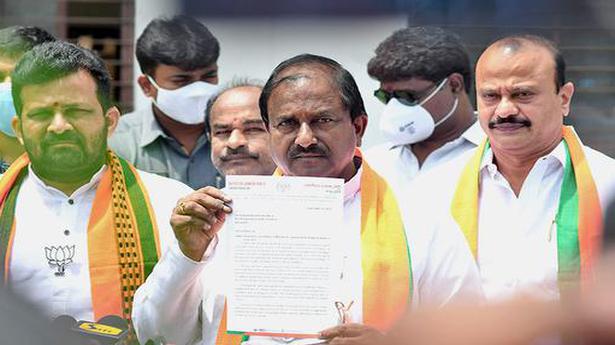 A delegation of the BJP led by its State president Somu Veerraju appealed to Governor Biswa Bhusan Harichandan to instruct the State government to rescind the appointment of 52 special invitees to the Tirumala Tirupati Devasthanam (TTD) trust board .

In a memorandum submitted to the Governor at Raj Bhavan on Monday, Mr. Veerraju said the Governor must look into the manner in which the TTD was being administered by the government and the constitution of an 81-member ‘jumbo trust board’, which included 52 special invitees and 24 regular and four ex-officio members.

“The appointments to TTD trust borad has become an instrument to further the interests of the YSRCP. The TTD is being treated as a political rehabilitation centre,” he said.

He alleged that the members consisted of the Chief Minister’s business partners and people with criminal antecedentsThe TTD trust board has been functioning well for several decades without any special invitee and the Endowment Department’s claim that it would serve the devotees’ interests has no element of truth in it, he said.

“The trust board needs people with a known record of religious service, scholars, experts in temple traditions and pundits, not dubious individuals and their followers,” said Mr. Veerraju, seeking the intervention of the Governnor in the matter.

Meanwhile, TTD trust board former member and BJP leader G. Bhanuprakash Reddy filed a PIL in the High Court challenging the G.O. Nos. 245, 568 and 569 (all dated September 15) through which 24 persons were appointed as the members and special invitees to the TTD trust board.

“The G.O.s are illegal, arbitrary and in violation of the provisions of the Andhra Pradesh Charitable and Hindu Religious Institutions and Endowments Act, 1987 and Articles 14, 25 and 26 of the Constitution of India,” he said.