A day after the State government permitted three types of herbal preparation after the Andhra Pradesh High Court’s intervention, ayurvedic practitioner B. Anandaiah on Tuesday began elaborate arrangements for mobilising the ingredients for making the herbal variants.

Commissioner of AYUSH V. Ramulu had said on Monday that the herbal concoction was not an ayurvedic medicine and was not found to have any side effects. People could take the preparation as a health supplement that could boost immunity, he had said.

SPSR Nellore District Collector K.V.N. Chakradhar Babu along with Superintendent of Police Bhaskar Bhushan and Deputy Collector M.N. Harendhira Prasad held hectic parleys on the ways to allow distribution of the permitted variants without any violation of the COVID-appropriate behaviour and the partial curfew in force.

“The decentralised distribution of the variants will start from Monday,” YSR Congress Party district president and MLA from Sarvepalli Kakani Govardhan Reddy said emerging out of the talks with the officials along with Mr. Anandaiah. Priority would be given to those seeking relief for the viral disease during resumed distribution, he said.

Mr. Anandaiah said he would require at least four to five days for procuring the ingredients from various places through a network of volunteers.

Nobody should try to visit Krishnapatnam or Nellore for the herbal preparations, Mr. Bhaskar Bhushan said after reviewing the security arrangements at Krishnapatnam and at other places en route, including on the Chennai-Kolkata highway, to prevent the huge rush as witnessed earlier. 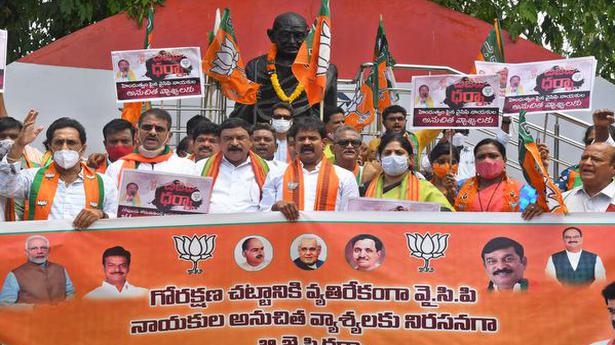