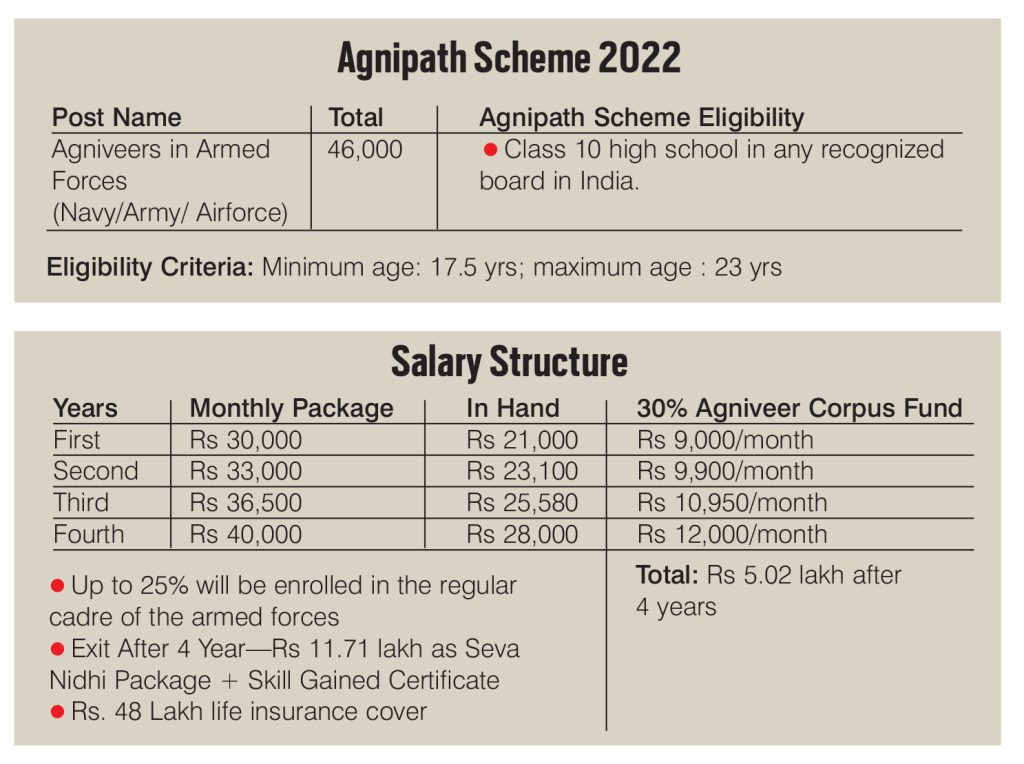 It might seem a bit strange that a complete change in the recruitment process and even in the employment details for short service commission in the Indian defence forces was never mentioned or tabled for discussion in Parliament. For all practical purposes, India’s defence is a matter above party politics, and this lacuna seems odd.

The Agnipath scheme, expected to result in the creation of part-time Agniveers, has resulted in nationwide protests and the government is on the backfoot, desperately trying to explain why this is good for the nation’s youth. This national embarrassment could have been avoided if the government had taken into confidence parties in the Opposition and had held a systematic debate. What the government did, instead, was to push forward a controversial scheme through a Cabinet approval on June 14, and on the same day, Union Defence Minister Rajnath Singh, along with the chiefs of three armed forces, publicly launched the scheme.

Political hyperbole, such as “patriotism”, “motivation”, etc., have failed to create confidence in the youth. Young people from impoverished families, training privately for two years for a place under the Indian armed forces flag, exploded. Two years had been lost due to Covid-19, when no recruitment could take place, and the youth were hoping to be back in contention now. Death of hope is greater than the actuality of death itself.

The details within the scheme (see table below) are worthless in the face of a bleak future that awaits 75% of the recruits who will be thrown out of the job train in four years, without even the lifeline of a pension. As an aspirant correctly pointed out, the job of an ATM security guard after four years as an Agniveer, is probably not a very “patriotic” act and definitely lacks “motivation”.

If the government’s aim was to reduce the pension burden, other avenues could have been found. In any case, there is enough wasteful expenditure in the country, a small cut in which can easily allow the accommodation of the pension bill.

It is callous to completely stop other methods of short service recruitment and keep only the absurd four-year gate open. As a country, we are proud of our armed forces, and we cannot, by any stretch of imagination, grudge our jawans’ pension.

The idea is to get 46,000 recruits, in the age-group 17 and-a-half to 21—the upper age limit has now been extended to 23—who will undergo six months’ basic training (because, nothing above basic can happen within that time period) and retirement is just around the corner even as the training gets over. Those in the upper age limit will be forcibly retired at 27, an age where no entry level job is possible.

Union Home minister Amit Shah has said that different security organisations, such as Assam Rifles, will absorb some of the retired youths, but in the absence of any official documentation on that, such comments mean little.

The entire issue has to be seen in the backdrop of the overall job situation in the country. The economy is in a downward spiral—the world economy has a lot to do with it—and jobs are scarce. Business, especially in the MSME sector, is in the doldrums, and amid this, the armed forces recruitment was one ray of hope the youth of India had clung on to. That ray hope has been extinguished.

The claim of politicians that public sector units would absorb those thrown out of the scheme in four years flies in the face of the government’s own policy of getting out of all manner of business. The divestment scenario has been a disaster. The revered LIC was partly privatised through an IPO, but its share price has now reached rock bottom, way below its IPO price. Which PSU would, now, be eager to take in more recruits, when they are preparing for a leaner overhead for the sales market?

As for the different security organisations—such as Assam Rifles, Border Security Force, the CRPF, RPF, CISF, ITBP, other police forces, etc—they all have their own recruitment processes. What happens to those recruitment processes? In the past, many of these organisations had refused to accept short service (maximum 15+2 years) retirees from the army, saying the training methods were very different and adaptability was not possible. Plus, there was the problem of seniority adjustment. Remember, there are youths who prepare for these recruitments as well.

Also, we need to keep in mind two things. First is the recent Railways recruitment fiasco, which had also created a massive stir, and then the fact that the three farm laws that the government had brought in had to be withdrawn. If and when the government has to step back from this announcement (Agnipath), it will be a complete loss of face, not just for the party in power, but also for the Indian government in general. The world will be watching.

In passing, though, one has to observe that it has been the nature of protests today that public property is destroyed. Whatever the reason for discontent, this destruction is neither legit nor sane. The Indian Railways is not a profit making organisation. It is mostly paid for by taxpayers of the country. Hence, it is imperative that the government protects it at any cost. This is one of the lifelines of the country.

Also, the new and dangerous trend of attacking trains which has passengers in them has to be dealt with a very strong hand. If the government shows its inherent weakness in this, the country will descend into anarchy. It was fortunate that the Shalimar Express, set on fire at the Secunderabad station in Telangana with people still on board, did not see any casualties.

Quite like the way different methods can be found to adjust or accommodate the pension burden, there are many other methods of protest. This violence has to be stopped now and even parties in the Opposition have to appeal against this. Society cannot be allowed to descend into madness.