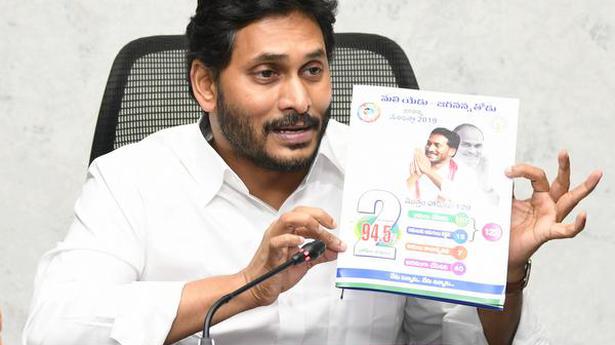 Chief Minister Y.S. Jagan Mohan Reddy has expressed satisfaction that he could fulfil 94.50% of the election promises in the last two years and reiterated his commitment to doing the best for the welfare of the masses in the coming three years. Nearly 66% of the beneficiaries are women, he has observed.

Releasing letters being sent in his name to the beneficiaries of various schemes and a brief report on the promises delivered after May 30, 2019, when he was sworn in as the Chief Minister, at his camp office on Sunday, Mr. Jagan Mohan Reddy said his government’s accomplishments would not be possible without the people’s cooperation.

“A sum of ₹95,528 crore has been given to the people through the Direct Benefit Transfer scheme and another ₹37,197 crore were disbursed through various other schemes like YSR Aarogyasri, Jagananna Thodu, Gorumudda and YSR Sampoorna Poshana.

The total benefits paid out amounted to nearly ₹1.30 lakh crore. The great thing about it was the transparent manner in which the payments were made at the doorstep of the beneficiaries, he said.

Mr. Jagan Mohan Reddy said the village and ward volunteers have been an important cog in the wheel, whose dedication made it all possible. The services rendered by the District Collectors and a whole lot of government functionaries were commendable.

A letter containing the details of schemes availed by each beneficiary and a snapshot of the promises delivered by the government, would be handed over by the volunteers, he said.